A public road leads right through the middle of the property 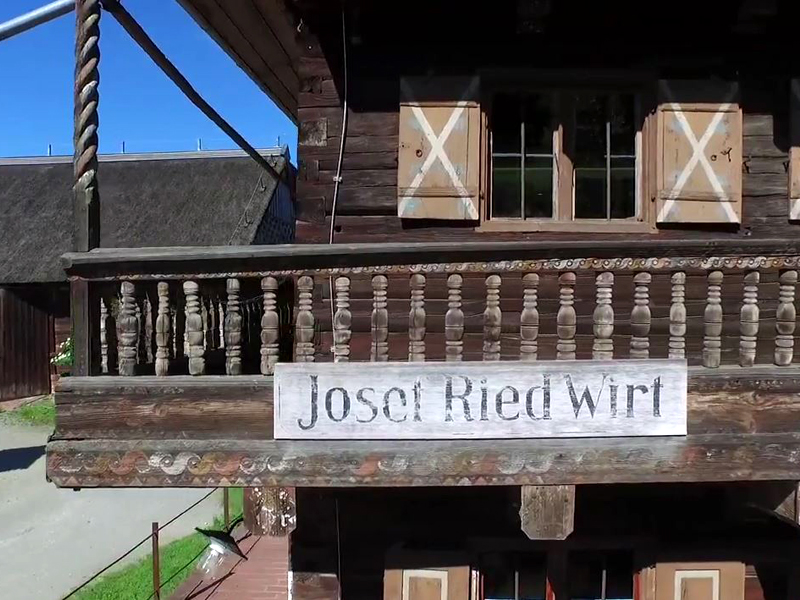 For forty years the Heilmeierhof was a sleepy corner at the very end of the museum complex. The museum education has been established there since 2012. Now activity is vibrant there every day. Girls and boys rush into the schoolroom, hot water from the zinc-plated tubs steams in front of the washhouse, freshly washed aprons flutter on the lines and the bell from the village shop rings.

The Heilmeierhof complex is arranged in the style of an open four-sided farmstead. Byre-dwelling, barn, granary, “Austragshaus” (separate house for retired farmer & wife) as well as a combined washhouse & bakehouse are grouped on both sides of a narrow road. The reconstruction corresponds to an innkeeper’s property with farm. The byre-dwelling, a block construction with richly painted balconies, is dated 1795 in the tympanum. The house was removed in 1972 and rebuilt in an idealised manner on the young museum grounds in 1974. Since 1996, its façade has been faithfully reconstructed as an inn in accordance with historical sources.

The farmstead is used for events. Readings and traditional folk music performances are held in the tavern room, while a room for events is set up in the barn. A schoolroom has been attached to the dwelling house since 2017. An exhibition with many valuable collection items is dedicated to the stove-fitter’s trade and rural brick production.

Byre-dwelling from Pilberskofen near Mamming; dated 1795 – barn from Blindenhaselbach near Neumarkt-Sankt Veit; single threshing floor post construction with ornamental “Bundwerk” carpentry; marked 1770 – granary from Trauterfing near Vilsbiburg; elevated block construction with open Bundwerk carpentry; lower floor originally used as a wagon shed – “Austragshaus” (separate house for retired farmer & wife) from Winhöring; dated 1728 over the front door; set up as an old village shop since 2014 – washhouse & bakehouse; reconstructed in 2011 according to a construction plan (1901) from Salksdorf near Geisenhausen