Bowling was once a popular sport

In 1904, Kaspar and Magdalena Frischeisen built a bowling alley on their inn premises in Egglkofen. The bowling alley with its gazebo and the little beer garden in front – near the village centre, where the church, access road to the castle, the new railway station and two inns converged – was the meeting place for local residents and farmers. 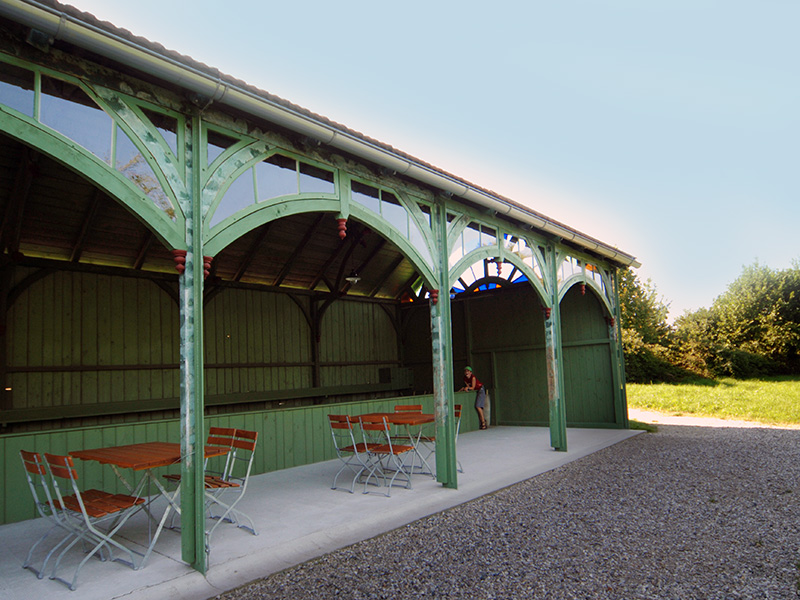 Even before 1900, the construction of bowling alleys came to the countryside from the municipal inns via the suburbs. The Egglkofen bowling alley is a particularly beautifully arranged example. The delicate wooden construction is designed as a hanging type fixture. This timber framing is typical of that era from an engineering standpoint. From the beginning the structure was furnished with a green frame. The colourfully glazed gable windows and the historic ornamental elements are also original.

Bowling balls of various sizes and without holes are rolled on a traditional bowling alley. The hardwood plan on which the ball is placed and pushed is important. A “Kegelbub” (“ball boy”) fetched the balls from the gutter and placed them in the rolling box, which returned the balls to the bowlers by means of a slight gradient. After every person had a turn playing he set the balls up at spots marked on the floor of the alley. The largely original wooden structure at the museum is reinforced by steel supports.

Bowling alley from the Frischeisen inn premises in Egglkofen – built in 1904; transferred in 2001–2003